Top 20 Asinine Pins (and my snarky responses to them)

If you spend any time perusing Pinterest, it won't take long before you run into a pin that really irks you. If you have a pulse and more than a few brain cells working together to produce synaptic activity, that chance increases exponentially.

In this post, I have compiled my top 20 asinine pins, and what I screamed at the computer when I saw them. I left the original text in some of them, with my response following the (>>) brackets.

These all came from my Snark board on Pinterest. By looking at my other boards, you are surrendering your right to judge me. 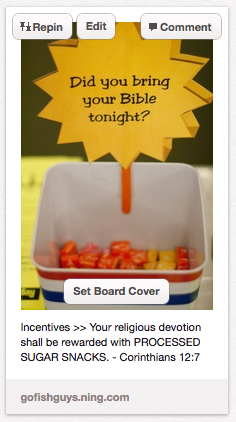 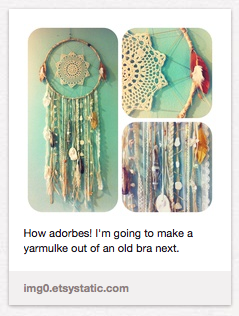 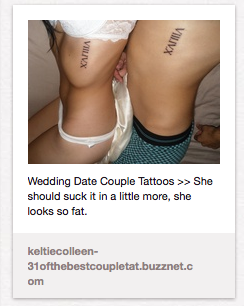 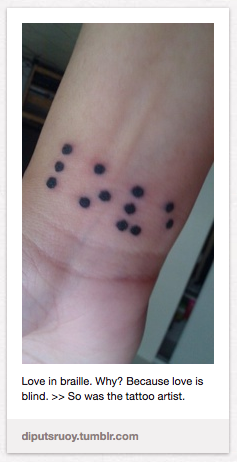 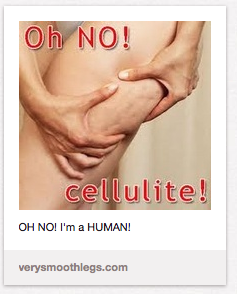 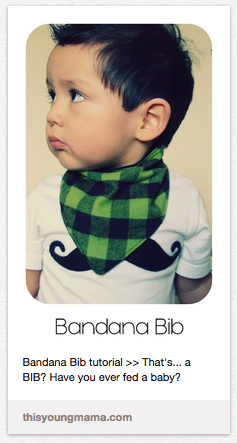 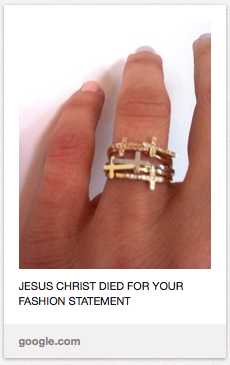 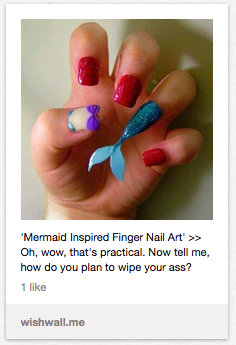 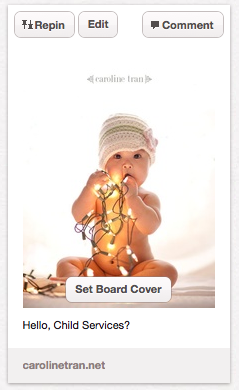 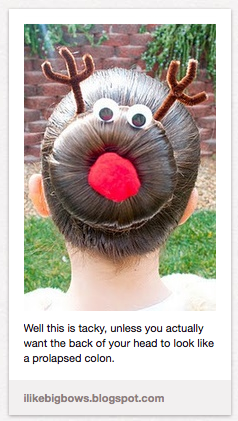 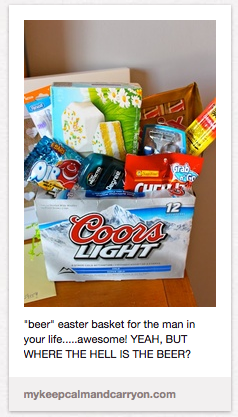 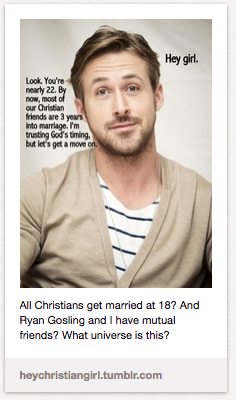 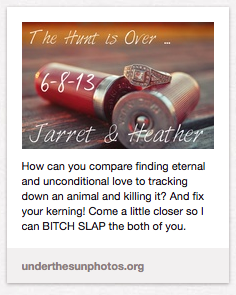 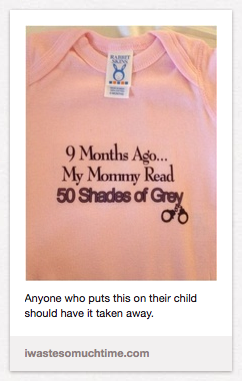 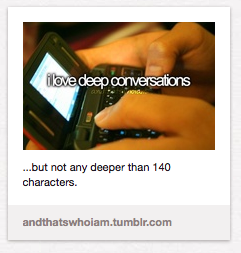 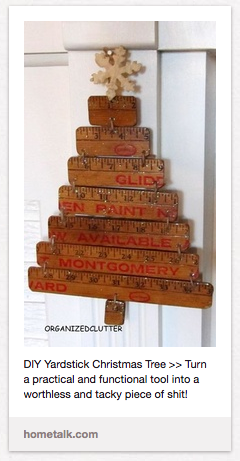 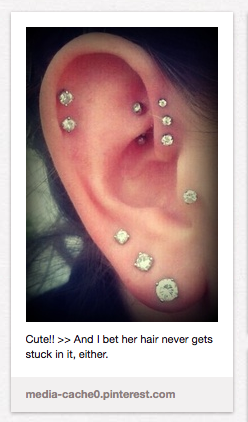 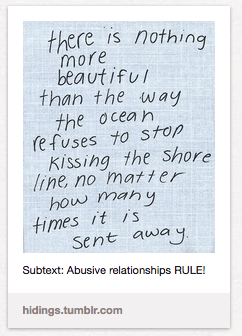 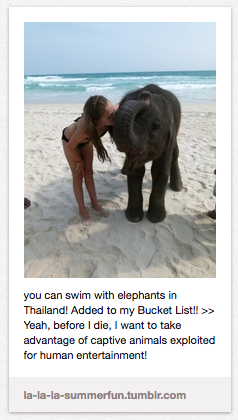 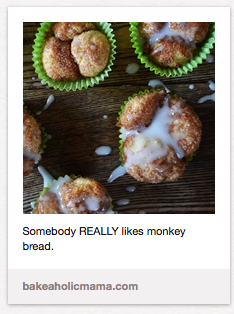 Posted by Rusty Shakleford at 4:29 PM No comments:

Sometimes, its the little things.

A shout out to all my fat, jealous, Scrabble trolls.
Posted by Rusty Shakleford at 6:38 PM No comments:

It's the thought that counts...

They say that it's the thought that counts.

....BUT WHAT THE HELL WERE THEY THINKING?

It's my daughter's first Christmas and birthday, so she has been receiving gifts from our out-of-state relatives.

Most of the toys that were sent have been deemed inappropriate.

I'm not one to be ungrateful for receiving gifts, but I'd really like to know what would make somebody think that this is okay for ...anybody.

This thing looks like its about to consume your soul. The box says it "giggles", but I assure you it actually cackles. The box also advertises that it is "baby safe" - which really isn't a selling point if it haunts your daughter's dreams until she is 12.

It has a five-head, and looks like it hovers over your bed while you sleep at night. Fortunately, Goldberger offers a money-back guarantee. So we'll be taking advantage of that.

We also have this little gem -

Even if I lacked the judgement to not allow my daughter to play with a toy voiced by a man who allegedly molested a dozen children, I still don't think I would let her play with a toy that is physically ill.

I want my daughter to be happy and healthy, not constantly coming down with a cold because she has a toy that sneezes. Who the fuck came up with this? Did Alister Crowley design children's toys between rituals?

Speaking of Satan, we also received this:

I wouldn't even complain if we hadn't specifically told them, over and over "NO DISNEY." But when the gift is included with a note that says "I couldn't resist!" (read: "Fuck you!"), I just can't help but think that we shouldn't have said anything at all.

This gift came from a family member who loves Disney. But we don't. It's creepy, it's soulless, and I don't fucking want it in our house or in our lives. They know this. So I wonder if it occurs to them they they are wasting their money?

I don't know what would be wrong with sending a regular goddamned stuffed animal. Just a regular fucking toy. No sneezing, no soul-sucking eyes - just a cute little animal that isn't branded with a multimillion dollar corporation.

Or, not sending a toy at all. She doesn't need any more toys. She can barely stand up in her playpen she has so many toys. Right now, she is entertaining herself with a little paper box that a bottle of Aleve came in. She needs diapers, and baby food. Not dolls.

So while we drive around Albuquerque today, returning these - items - I will remember that it is the thought that counts - and our family is brain-dead.
Posted by Rusty Shakleford at 7:22 PM No comments:

Posted by Rusty Shakleford at 11:03 PM No comments: 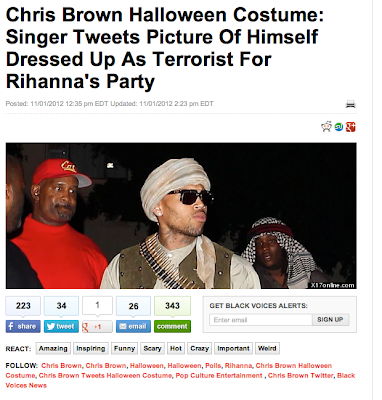 If one of my stupid ass-hat friends had come up with this costume, I'd probably drink to it. I wouldn't think it was the most enlightened thing ever, but I'd eat my words.

But here is somebody who makes millions of dollars by putting out terrible, awful music which perpetuates this culture-less cesspool that is America. He will never have to worry about financial security, where his next meal will come from, and foreign soldiers won't burst through his windows to drop a grenade. What a lucky fellow.

So why not dress up as possibly one of the most disadvantaged people in the world?

"But, Rusty, the terrorists are the bad guys!" The existence of Middle-Eastern terrorists is up for debate, because if you want to see the real terrorists, you needn't look past our own elected officials.

I don't see a terrorist. I see a man native to one of the many Arab counties who is ready to defend his home from the invasion of American soldiers with an agenda to control the Holy Land.

I believe it was Katt Williams who said, "Do you know what an Iraqi soldier looks like? I'll give you a minute..." He went on to make the point that our soldiers aren't fighting their soldiers - they're fighting guys in flip-flops and baseball caps.

And although Halloween is over, next year you can dress up like an Aboriginal man - dirty, drunk and wearing rags because he and his culture were entirely displaced when his native land was commandeered by the British empire. G'day, mate! Or you know what would be even better? You could dress up like one of those crazy African guys with a machine gun! Its so hilarious how corrupt government groups kidnap children as young as 2 or 3, and brainwash them to go back and take out their own village with an automatic rifle. SOOO funny!

Well I'll let you guys get started. Only 364 more days until we have another chance to exploit cultures we have no understanding of. GO tolerance!
Posted by Rusty Shakleford at 1:10 PM No comments:

A Message to all Earth Humans 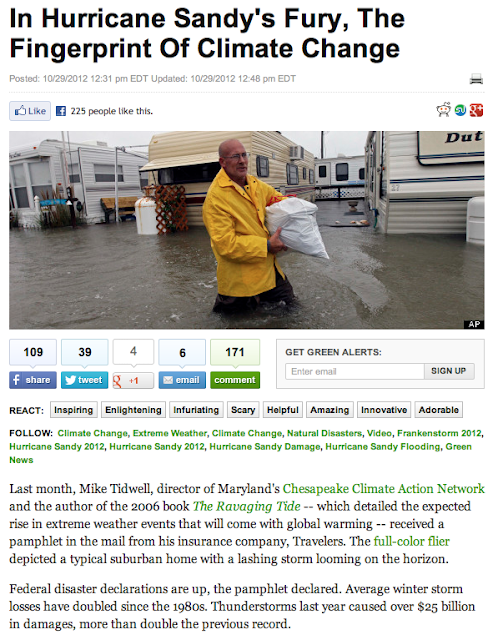 It appears that I have been appointed to tell the people of Earth that this planet is not a synthesized and custom-made habitat for us to enjoy without inconvenience until the end of time. It is an independent and ever-shifting planet that we happen to able to survive on. It is a planet of continental drift, solar flares, floods, earthquakes and volcanic eruptions - evolution, extinction, magnetic reversal of the poles, and from time to time, CLIMATE CHANGE.

How ignorant we must be to think that the Earth will put all this on hold so the humans can go about doing whatever it is that they do. Why is the thought of a coastline changing at some point in our lifetime so shocking? And if somebody stands up and says "global warming", I'm going to cut a bitch.

Yes, the earth is getting hotter. Do you think the Neanderthals called a national conference to discuss the impending Ice Age? Because, news flash: the Earth has gone through periods of becoming colder, and periods of becoming hotter for many, many billions of years. Sure, our presence probably isn't helping. But are we so self-absorbed that we think it all must be directly of our own doing, instead of the Earth just trying to hit the "reset" button? The Earth has survived impacts from asteroids and meteor showers - I think it can handle a little bit of pollution. But does it want to? No. So here comes climate change.

There's nothing we can do to stop it. Nothing at all. Even if we leveled all the Wal-Marts, decommissioned Halliburton and turned the entire planet into a groovy co-op, we'd still be in the same boat. We need to accept that the Earth will continue to shift for ever and ever, until the end of time, which may be upon us shortly anyways. So pour yourself a drink and consider relocating inland. We can't stop the turmoil, but we can at least get better seats.

Posted by Rusty Shakleford at 11:44 AM No comments: 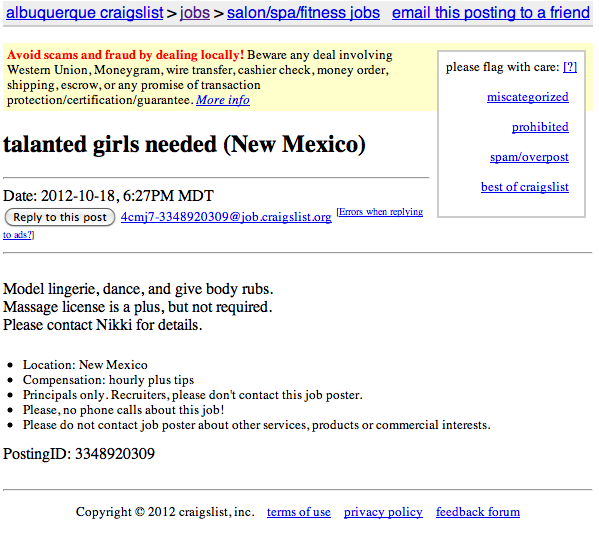 Posted by Rusty Shakleford at 1:47 AM No comments: